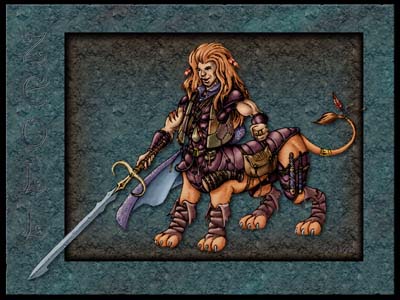 Zeoll is a liontaur bard/druid/seer in a Woldian game originally called "The Taur Isles," but since renamed "The Chosen of Domi." He is a member of a party of liontaurs, centaurs, and minotaurs devoted to ending war among the taur races and teaching that all taurs are the children of Domi, the protector god of the brave. Zeoll is diplomatic and friendly, and prefers negotiation to battle, but there is a dark side to him springing from the slaughter of his family, the years he has spent in the afterlife, and the invasion (now repulsed) of his mind by the god of disease.

Jerry, the founder of the Wold, invited me to play in the Taur Isles campaign in the fall of 2000. Originally, the game was intended to include only minotaurs and centaurs, but Jerry saw my site and thought a liontaur would fit in perfectly. Since then, other players have joined as liontaurs, and the race has become an important part of the Wold.

Fifth Adventure: The Map to the Black Sword, first half (DMs Jim, Kup)

Sixth Adventure: The Map to the Black Sword, second half (Co-DMs Bob and Carla)

Seventh Adventure: The Island of the Mad Doctor (Co-DMs Carla and Bob)

Eighth Adventure: The Search for the Black Sword (DM Donna)