Fans of the fantastical have long been entranced by the idea of creatures that are partly human and partly beast-like. Sphinxes, centaurs, mermaids, harpies, driders, satyrs, lamia, minotaurs, and, yes, even unipegataurs -- they all appeal to the idea that humans can be more than what they are in our drab, mundane reality. My particular interest is in wemics, also known as liontaurs -- basically centaurs, but with the horse bits swapped out for lion parts. Human from the waist up, leonine from the waist down, these creatures have a history that dates back thousands of years, although they get less press than their more widely-known kin. Let me beg your indulgence for a whirlwind tour of the history of the wemic.

Mythological and divine human-feline hybrid creatures have a long history, starting with the Lion Man of the Hohlenstein Stadel. The ancient Egyptians had a thing for lion-human hybrid creatures. Consider the gods Bast and Sekhmet for example, and sphinxes of course. Those Wikipedia articles are good overviews on those topics. But I have not been able to find wemics in ancient Egypt.

Moving on to Ancient Assyria, where the kings of the day decorated their palaces with statues and drawings of protective spirits. Check out this sphinx art, from Assyria, in the Egyptian style. The Assyrians were famous too for their bulls with the heads of people, called shedu.

And yes, there was a spirit that watched over you while you were taking a bath -- the "urmaḫlullű"! The first true liontaur -- that is, a lion-centaur, with a human torso, arms, and head from the waist up, and a lion body, four legs, and tail from the waist down -- this fantastic creature guarded the "ablution room" in the palace at Ninevah, circa 3,400 BC. Read more about the urmaluhlu in other screeds I have written, here, here, and here. Also check out page 179 of "The Mythology of Kingship in Neo-Assyrian Art," by Mehmet-Ali Ataç.

Now, there are hints I have found of wemic-ish things in Ancient Greece -- check out this old screed, scroll down for a broken statue, showing Zeus riding a wemic (if that's what that is). And I have this scanty hint of a sagittary in a legend of Constantinople. These are very thin reeds, however.

It is a bit ambiguous, but I have found two wemics on famous golden horns in Denmark, made around 400 AD. Click here to find out more about those.

The next undeniable wemic sighting I have found is on the coat of arms of King Stephen of England, grandson of William the Conquerer. He ruled from 1135 to 1154, and the liontaur on his shield was referred to as a "sagittary."

Stephen's enemies called him the "Sagittary of London Park," and I think they meant it as an insult, but it sounds pretty bad-ass to me. Stephen was not only King of England, but also a French noble, being the Duke of Normandy. Here's a French sagittary that was once a decorative buckle on a small coffer, circa 1180.

The coat of arms of King Stephen consisted of a golden wemic, or "sagittary," in profile, with a drawn bow, on a red field. For more detail, check out this old screed of mine. Also see this page. Another version has three sagittaries on the shield.

Moving on, no less than the Bard of Avon sang the song of the sagittary. In his 1602 play, "Troilus and Cressida," Shakespeare mentions a horrible monster. "The dreadful Sagittary / Appals our numbers. Haste we, Diomed, / To reinforcement, or we perish all." But is this sagittary a centaur or a liontaur? There's reason to think it could be either.

Between King Stephen and Shakespeare, lion-people turn up in a number of sources, including prayer books and holy tomes, buckles and clasps, and architectural carvings. These lion-centaurs are mostly just sketches in margins and gargoyles in churches, that is, incidentals designed to amuse, called "drolleries" and "grotesques." Most medieval sagittaries were references to traditional centaurs, lingering on to the modern day as the constellation Sagittarius. But there are more examples than you might expect of lion-human hybrids, and truly leonine sagittaries, once you know to look for them.

And that's it for history. Well, okay, there's the Lion Centaur of 1846, but I'm just not sure what to make of that.

In the modern day, there have been, I believe, three separate reinventions of liontaurs. First, in 1974, in Poul Anderson's SF novel, Fire Time, a major race and several major characters are clearly liontaurs! Here's the art from the cover of the paperback, and it does a good job of representing the author's words. 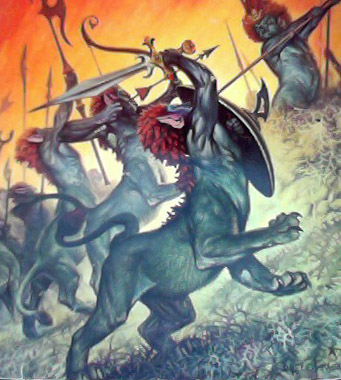 Then, in 1982, D&D publisher TSR released an expansion set of "Monster Cards." Each set included a couple brand new monsters, and the very first set introduced the wemic. This liontaur was the first ever "wemic" by that name. It was created by Dave Sutherland, an iconic artist who drew many classics for D&D: 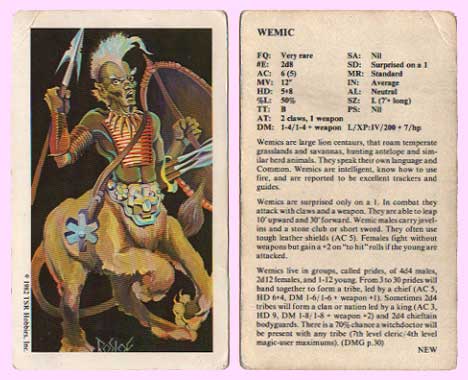 The very first "wemic," a Monster Card special for Advanced Dungeons and Dragons

It is hard to look at the two pieces of art above and not imagine that the Ishtarian did not inspire the wemic.

And the famous Quest For Glory video game series first used the term "liontaur," so far as I can tell, with the introduction of Rakeesh the Paladin in Quest for Glory II: Trial by Fire. 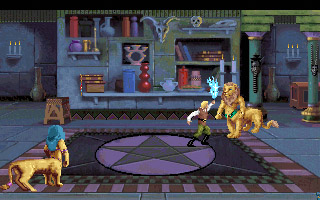 See how these three lion centaurs are different? The Ishtarian is a sci-fi race with photosynthetic capabilites (see how the example above has a greenish cast). The wemic is a pure centaur-analog, completely human from the waist up. And the liontaur is furry -- even the humanish parts -- and has a beastial face with catlike features. These differences are part of my circumstantial case for three seperate reinventions. Did Dave Sutherland read Fire Time? Did the makers or Quest for Glory ever meet a wemic in playing D&D? Maybe, maybe not! ... But why, then, did Anderson call his creatures "Ishtarians"? Maybe after Ishtar, the Ancient Assyrian goddess known for her love of lions? Maybe it all goes back to the urmaluhlu after all?

But either way, wemics, liontaurs, felitaurs, lion-centaurs, chakats, cattaurs, and all the rest have found new lives in games, stories, and art, especially online. And for fantasy fans, that's fantastic.